An alarm system for your security

Tetraedre has created an alarm system which allows to detect if a rock is moving or falls. Our system is based on the TRP-ALARM which sends radio messages instantaneously in case of break of a wire. It is a reliable system which provides a point-to-point communication.

The system consists of three elements : 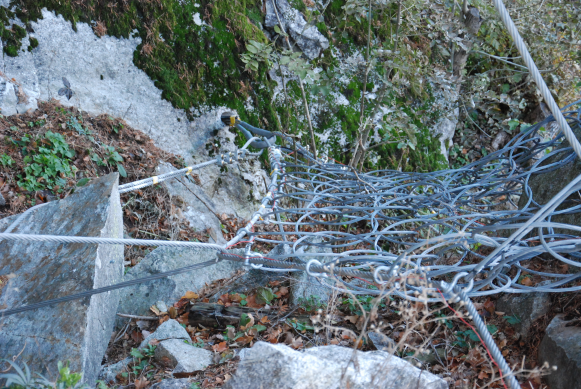 Our system provides a constant current in the wire which is fixed to the net which surrounds the rock to be monitored. If the wire is cut, the current cannot then pass any more and it activates the alarm*.

* Tetraedre disclaims any liability in case of damage due to a malfunction of the sensor.

The TRP-ALARM measures continuously the presence of the wire. To avoid false alarms, several measures will be made in some fractions of a second of interval. As soon as the break is detected and confirmed, radio messages are sent. The state of the wire can be also checked remotely via a TRMC.

A force sensor (strain gauge) is placed to measure the stress applied to the cable. Electric resistances are mounted on the gauge. They are measured by our TRP-17 module which is placed next to the strain gauge and transforms these values in force (N or Kg).

We have an additional function which allows to measure the variations of force. Indeed, if a rock falls on another rock where the force sensor is, the graph shows a fast increase of the force's value. A sudden change of force may indicate a danger.

The force measurement is sent by radio from the TRP-17. The TRMC receives this information and transmits them by GPRS to the user. It is possible to configure the TRMC so that it generates an alarm by SMS in case of significant increase of force. 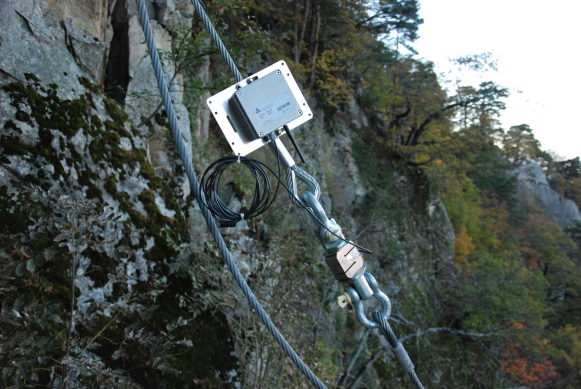 Our TRP module, paired with an extensometer allows to measure the displacement of rocks.

The extensometer is fixed to two rocks, which are to be monitored. The extensometer is made of a resistive sensor which gives the distance between both rocks. The TRP module measures this signal and transmits it by radio. This signal is then relayed by the TRMC which sends the information to the user. The TRP measures also the distance and calculates the speed of movement. These values are also transmitted by radio to the TRMC which sends them by GPRS to the user. 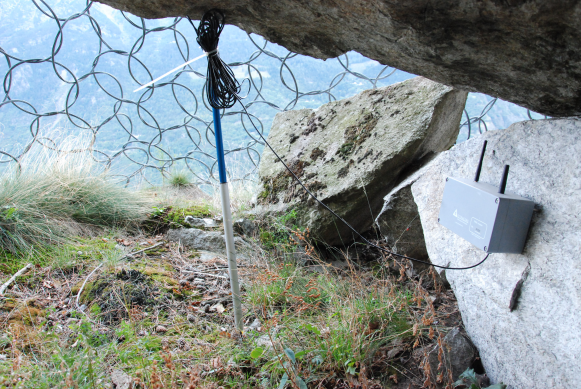 To measure and monitor if a rock falls in a safety net, it is possible to install a wire which will break itself under the weight of the rock. The system is the same that for the solution "Alarm system for your security" but without the direct alarm transmission, as there is not emergency as the weight catched by the net is not significant. The data are then transmitted to a TRMC which sends them by GPRS. Doing so allows you to see the state of the different sensors (broken/not broken). It is therefore possible to see if there are rocks which are retained by the nets and if it is necessary to remove them. The TRMC-19 is also able to make this application without using TRP. In this case wires are directly connected to the TRMC-19.